The classic card game under the simple name Hearts or Worms — as you like, is familiar to many Windows users. This game is installed with the operating system, unless of course the categorical system administrator has blocked all games, which often happens on work computers in the office. If you don't have Worms installed on your computer, but you really want to play in your spare time, then we will correct this misunderstanding by offering you a flash version of Worms — - play to your health! The name speaks for itself — all your attention should be focused on not picking up cards of this suit. Also try not to take a bribe with the queen of spades.

Now a little bit about the rules. A 52-card deck is dealt to four players (three are played by the computer). At the beginning of the game, all players pass each other three of any cards that they consider superfluous in their hand. Then the game is played on the principle of bribes. The player who puts the highest card of the suit in which they entered, takes a bribe. If you do not have any cards of the same suit as the first move of the current round was made, you can put any card of a different suit. Don't take the queen of hearts and Queen of spades! The first move in the game is made by two crosses.

Worms for android, iPad and iPhone 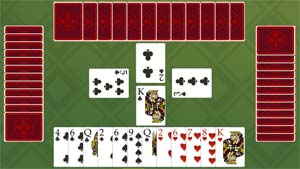 You can play the game HEARTS online 24 hours a day for free. It is no need to download and install it on your computer, and it is also not required you to be the registered user. Just ckick and enjoy. See also a set of related games below on that you might be interested to look.

HEARTS FOR YOUR TABLET