Here is one of the most popular card games — Uno (Uno). In this case, there are 3 players at the table: You and 2 of your opponents. Everyone, of course, will strive to win. Moreover, sometimes it seems that these opponents of yours are working together against you — so sometimes their actions and moves are coordinated and contradict your interests. But maybe it's just a feeling.

The game's country of origin is America, but the word uno itself means one in Italian and Spanish. Why one, you will understand after reading the rules to the end. And the rules of Uno are as follows.

There are 108 cards in the deck, but not the usual playing cards, but specially drawn ones. There are no suits here, instead there are 4 colors: red, yellow, green and blue. 72 cards have digital denominations from 1 to 9 (two identical ones in each color). 4 cards with a face value of 0 (one in each color). The remaining ranks are not represented by numbers or ranks, but by instructions for action for the player against whom they are played. There are 8 take two cards, 8 — reverse (reverse - change the direction of moves: from clockwise to counterclockwise and vice versa). There are also 8 skip cards available. The last 24 pieces are also present in the deck with 2 pieces of each color. There are also 4 black cards that order a color (the color is chosen by the player who placed the card), and the last 4 are also black-take four (the player against whom such a card is played must take 4 sheets from the deck).

The game is played in rounds. Each round ends when one of the players runs out of cards. The course of the game is simple. Each player, in turn, can place on the table in a common pile one card from among those that he has in his hands at the moment. At the same time, the card laid out must be either the same color as the top one in the pack on the table, or the same face value. Black cards can be placed on any color. If a player does not have any cards that meet these criteria, they can draw a card from the deck. After playing your card, the move is passed further in a circle: either clockwise or in the direction specified by the last played reverse card.

As you can see from the list of cards, opponents can go under you with the skip a turn or take 4-d card, and you will have to follow this instruction, that is, skip a turn or take four cards and also skip a turn. It is advisable to play a card with a choice of color when you have accumulated a lot of cards of the same color, or simply there is nothing else to go with.

When during the game, the player has only one card left after the turn, then he must say Uno! (click on the Uno button). If he does not do this, he will be dealt two penalty cards from the deck. After each round, the subtotal is summed up. But the game ends not by the number of rounds played, but by the time, so keep an eye on the alarm clock.

UNO for your tablet 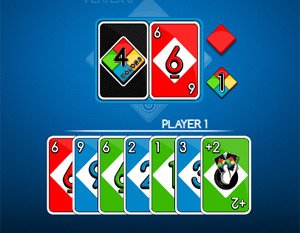 You can play the game UNO online 24 hours a day for free. It is no need to download and install it on your computer, and it is also not required you to be the registered user. Just ckick and enjoy. See also a set of related games below on that you might be interested to look.