Fans of aviation, fans of the civil air fleet of the USSR and the legacy of its aviation industry, fans of such aircraft as: Tu-134, Tu-154-this game should clearly like it. Here is a very simplified, made on the basis of an ancient simulator, but still working, online simulator Tu-154. The Utair Leasing company logo is displayed in the upper-right corner. Utair still has these planes, and they are in working order.

So, you are in the cockpit of the most massive jetliner of the USSR. All instruments are in place, and many controls are also visible. At the bottom is a digital dashboard, screwed on by the authors of the game, on which you will see some parameters of engine operation, speed, position of mechanization, chassis, etc. On the dashboard itself, some devices also work, such as air horizons and radar, for example.

Short excerpts from the Tu-154 RLE (Flight Operation Manual), as well as the assignment of control keys (and there are quite a lot of them, as, however, in any simulator), you can see in the help section (click the question mark in the upper-left corner). The task before you is simple, but only at first glance. Given the fact that the cabin crew of this aircraft in reality consists of three or four people (commander, co-pilot, navigator and flight engineer), and here you will have to cope alone, the task does not seem so trivial. Take off and land on the designated runway.

Are you ready? Flaps 15, take-off mode, speed increase to 260-270, lift (steering wheel on yourself and hold), safe installation-remove the chassis... Let's go! 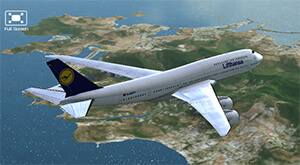 You can play the game TU-154 SIMULATOR online 24 hours a day for free. It is no need to download and install it on your computer, and it is also not required you to be the registered user. Just ckick and enjoy. See also a set of related games below on that you might be interested to look.