Classic 10-minute Spider solitaire with two suits from Arcadium studio. Their universal version of the game with the 1st, 2nd and 4th suits at the same time-has not left the first pages of the rating for ten years! The difficulty of disassembling Spider Solitaire is distributed as follows: 1 suit is the easiest option, 2 suits - more difficult and, accordingly, converges much less often, 4 suits - extremely difficult to make out completely.

The player's task is to collect all 104 cards in eight piles sorted in descending order (4 spades and 4 hearts): from king to ace.

So, 2 suits: spades and hearts. You can move cards only in descending order of face value (rank): only the lowest to the highest. For example, you can move queens to kings, ten to jacks, fours to fives, etc.The suit is not taken into account when moving cards between sorting columns: put spades on spades, hearts on spades, hearts on hearts, or spades on hearts. You can transfer not only one card to another, but also a whole sequence sorted by rank, for example: queen, jack, ten, nine, etc., but all cards in this sequence must be strictly of the same suit!

The stumbling block in this version of Spider Solitaire is time. The timer gives you the opportunity to play for only 10 minutes, and this time is not enough to conduct a full, in-depth analysis of the situation on the game table. You have to act quickly, but hasty tactics inevitably lead to mistakes. On the other hand, such a restriction will not allow you to get distracted from work (if you, of course, play at work) for too long... 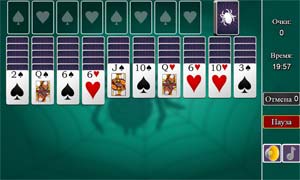 You can play the game SPIDER SOLITAIRE 2 SUITS online 24 hours a day for free. It is no need to download and install it on your computer, and it is also not required you to be the registered user. Just ckick and enjoy. See also a set of related games below on that you might be interested to look.

SPIDER OF THE SAME SUIT