Especially for fans of logical card games, we offer a successful layout of three solitaire games in one-in front of youSpider with the ability to choose the number of suits in the layout: 1, 2 or 4. Professionals know the difference in difficulty between the first and the other two versions of the game. For beginners, we recommend choosing a one-suited Spider, but you can't handle four suits at once.

A bit of theory and rules. 52+52=104 is exactly how many cards will be obtained when adding two standard decks, and this is how many participate in the layout of Spider Solitaire. Depending on the number of suits (1-2-4), you will receive either all the cards of the spade suit (1), spades and hearts (2), or all four suits (4) in the hand.

44 cards are laid out in 10 closed columns (5 in the first four and 4 in the rest), the top cards in the columns are placed open. The 60 remaining cards rest in closed packs of 10 pieces each, and are issued during the game only in packs as a whole - one card per column. You can move maps between columns. You can transfer both single cards and several, but only ordered by rank and always of the same suit.

Disassembling solitaire is like weaving a spider's web, which is probably why the game got its name. And finally, it would not hurt to voice the goal of the game. You need to arrange the cards in eight packs. Each pack must be made up of cards of the same suit, and all of them must be sorted by rank (King-Queen-Jack - ... - three-two-Ace). 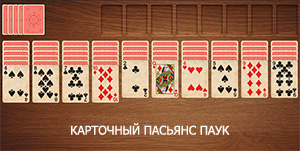 You can play the game SPIDER 1-2-4 SUIT online 24 hours a day for free. It is no need to download and install it on your computer, and it is also not required you to be the registered user. Just ckick and enjoy. See also a set of related games below on that you might be interested to look.