Billy was an unusual American kid. His imagination was different from the other children, and his father told him stories about werewolves, people who turn into wolf-like monsters when the moon is full. At night, Billy saw the full moon and realized how to defeat the werewolves he was so afraid of. The boy came up with a plan in which he will build an aircraft out of a box and launch it into Earth's orbit, and from it shoot the Moon with a cannon. No moon, no werewolves, no problems. Well done, Billy!

This is an interesting arcade game to overcome the distance. Click and drag the mouse to increase the power of the catapult shot. You won't be able to reach the moon for the first time, so you need to buy upgrades between flights and do everything possible to help fulfill the young pilot's plans. 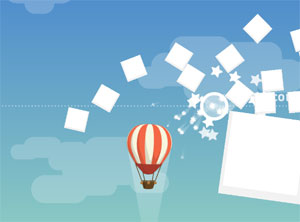 You can play the game PILOT BILLY online 24 hours a day for free. It is no need to download and install it on your computer, and it is also not required you to be the registered user. Just ckick and enjoy. See also a set of related games below on that you might be interested to look.