What do we know about Freecell Solitaire? At least the fact that it is laid out in its classic version of 52 cards. The authors of the double version increased the number of maps used in the layout exactly twice. Thus, you have a double Freecell, collected from 104 cards.

What has changed, other than the quantity? The number of sorting columns has increased from eight to twelve. The free cells themselves are no longer four, but six. And, of course, the volume of columns for re — mapping has increased-there are now significantly more maps in each of them. In the rules of this solitaire game, shifting cards between columns is allowed only with a change of suit. That is, you can only put a black five on the red six, and, for example, on the two of spades or crosses — only the red ace.

When you save four home cells, the question arises: how do I put all the cards in them? We start as usual with aces, and finish the first stage with kings, and then put aces on them again. For the player's convenience, the sorted sequences are highlighted, while the rest of the cards are slightly shaded. Time passes, but the game does not take it into account. 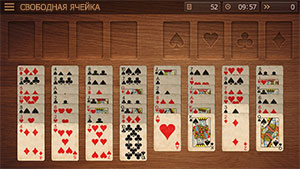 You can play the game DOUBLE TAPEWORM online 24 hours a day for free. It is no need to download and install it on your computer, and it is also not required you to be the registered user. Just ckick and enjoy. See also a set of related games below on that you might be interested to look.