Circus paraphernalia, the appropriate entourage, and the fact that the action takes place against the background of a circus arena allowed us to give solitaire such a name. However, if you discard the scenery, you will find it on the game table Free Cell, a solitaire game that is often referred to as Freecell, one that was present along with Klondike Solitaire already in ancient versions of Windows.

Cards and their engraving favorably distinguish the game from its analogues. Look, the numbers on the map sheets are large and clear, the images are noticeable and allow you to accurately distinguish a card of a particular rank, without confusing it with other similar ones.

The story about the rules will be short, just like they are. The layout of cards from a 52-sheet deck with 4 suits is made entirely, and all of them are laid out on the game table in eight vertical rows. When stacking rows from top to bottom, each next (lower) card covers the previous (upper) one. You can only play (drag and drop) open cards, which after the full layout of the deck is only 8.

There are 8 cells at the top of the table. They are empty at the beginning. In 4-d right, which is sometimes called home or base, the player needs to move all the cards without any remainder, sorting them by face values (ranks) and suits. That is, in each of the four packs to the right at the end there should be 13 cards in sequences from the ace (ace, 2, 3...) before the king. This is the purpose of building solitaire. The left four can be used to temporarily deposit cards that interfere with the current sorting process. They are the free cells that give the basic solitaire game its name.

For thinking, logic, mechanics and technique — all manipulations with the cards until the goal is reached, the player is given 20 minutes. If you have mastered the rules, then this time should be enough.

The convergence of solitaire is high, but the conclusion about a successful layout can not be made at the start. Only in the course of the game will you understand whether solitaire is developing or not. Of course, a lot depends on the sequence of actions of the player. Successful layouts and enjoy your stay!

Free cell for the tablet 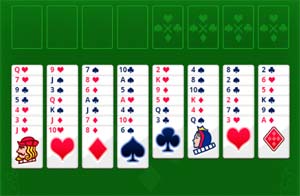 You can play the game CIRCUS SOLITAIRE GAME online 24 hours a day for free. It is no need to download and install it on your computer, and it is also not required you to be the registered user. Just ckick and enjoy. See also a set of related games below on that you might be interested to look.