Logical-physical puzzle or a competition for two players. Prehistoric times have learned to play ball, the trouble is that the balls were made of stone, and beat them with their feet would be very painful and traumatic, so they were launched from catapults.

For the shot, you need to reset the stone on the arm of the catapult (LMC) and fire it towards the opponent's goal. In both game modes you need to get in the opponent mode for two players, you additionally need to defend your goal from the opponent, defeating him faster.

Score a goal is possible only with the help of balloons, but to clear the mountains and obstacles only by using bombs. To blow special a time bomb, press the spacebar. 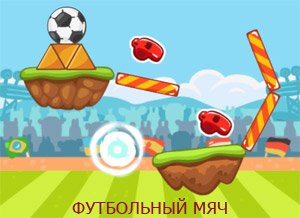 You can play the game CAVEMAN FOOTBALL online 24 hours a day for free. It is no need to download and install it on your computer, and it is also not required you to be the registered user. Just ckick and enjoy. See also a set of related games below on that you might be interested to look.