the Game Tetris has gained popularity in the 90-ies of the last century. Tetris was fond of the mixed-age audience, and the popularity of the game was so high that after the success on the computer game began to build in various gadgets. There was such a device Bricks 99 in 1, which is widely sold in those years.

Then mobile phones and tablets have not yet appeared, so in the subway, bus, tram and trolley bus often met people with this device, which in addition to dozens of varieties of Tetris was built for more games, for example, the famous Snake. Times have changed, there are new, modern games, but many fans of Tetris is not decreased rapidly. Still like the game and play it at every opportunity.

So, the figures consisting of squares, falling into a glass. Your task is to stack them so that the resulting lines do not remain empty squares. Completely filled squares line disappears. From level to level the game becomes more complicated, the figures begin to fall faster, and the player requires attention and a certain dexterity. Quickly lower the figure down helps down arrow key, and rotate the figure, you can click the space bar. 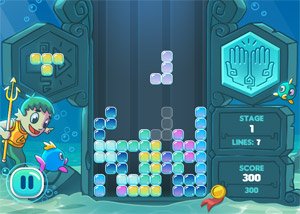 You can play the game TETROLLAPSE online 24 hours a day for free. It is no need to download and install it on your computer, and it is also not required you to be the registered user. Just ckick and enjoy. See also a set of related games below on that you might be interested to look.