Legendary and highly popular solitaire, which is somewhat similar to the no less famous Solitaire leader of our rating. Spider laid out two decks of 52 cards. This is a very exciting game contains three layouts: one suit, with two and four stripes. First, as the most simple, recommended for beginners, the second and third are more difficult. Your task is to arrange the cards in sequence from ACE to king. If in the process of unfolding, You see that there is nothing to move, press on the down card in the upper left corner, when this added another row of cards. Spider solitaire should lay out in between work to relax and unwind.

According to our rating of online games before You one of the most popular free solitaire games to date. Interest in the game is also the uncertainty of the outcome of the layout, because the Spider might clash, but maybe not.

Even perfectly mastered level of play with the 1st suit, the transition to two or four suit you may seem extremely difficult. The main point that causes the greatest difficulty in the disassembly, is the resurfacing of cards of different suits on each other. Obviously, the first step is to choose the suited options since then you can transfer them formed from the columns, i.e. the column is alive or working. Restrictions imposed by the rules of Spider solitaire, prohibit the transfer columns collected cards of different suits. Thus, if you put, say, peak ten nine of diamonds, remember that this column you have locked, for a tenner it will not drag available for the game will be only the top card.

It Should also pay attention to another feature of changing maps. If after the completion of the next stage of transformation-drag and drop, You needed a new batch of cards from the remaining deck, you will not be able to take it, if the table has at least one empty cell sorting. However, this is not a dead-end obstacle, because you can always put in an empty cell, any card or sequence. While this may create inconveniences, but they are not fatal, most likely. 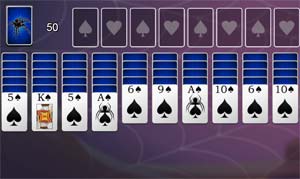 You can play the game SPIDER SOLITAIRE online 24 hours a day for free. It is no need to download and install it on your computer, and it is also not required you to be the registered user. Just ckick and enjoy. See also a set of related games below on that you might be interested to look.

SPIDER SOLITAIRE, ALL SUITS ARE