Are you on a break or hanging out in a cafe waiting for a friend or girlfriend? Order a cup of coffee, take out your laptop and play solitaire specially prepared for coffee breaks. And if your break is prolonged, then this solitaire game is enough for 10 cups of coffee! However, we do not recommend that you consume such a large amount of this drink, as the heart, you know, may speak unflatteringly about the consumer of such volumes.

As for the game itself, you can reveal the cards immediately - these are the classic Three Spades, with their traditional rules and layout. Convergence is high, there are many chances to win, but if you like to add a maximum of bonuses to the victory, then you will have to work quickly and carefully, without yawning cards.

So, grandmother for grandfather, that is, a five for a six or a four, a jack for a queen or a ten, and so on, until you clear the entire table. By the way, they don't put an ace on a king here! There are no options — there is an auxiliary deck, use it. Have a nice coffee break! 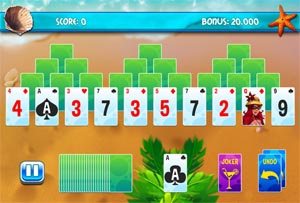 You can play the game SOLITAIRE COFFEE BREAK online 24 hours a day for free. It is no need to download and install it on your computer, and it is also not required you to be the registered user. Just ckick and enjoy. See also a set of related games below on that you might be interested to look.