The classic green baize and strict atmosphere remained on the work computers, and we are going on vacation, in a bright, colorful and unique jungle. It's always summer and warm here. However, due to the change in the situation, solitaire itself and the rules of its layout have not changed. This is the classic Pyramidthat many people love.

Let's remind you about your goals, tasks, and methods.

The cards laid out in the form of a triangle (pyramid) need to be removed, completely clearing the background image with a waterfall and vines — this is the main task.

Methods. Cards are removed in pairs. Click pairs with the total score of their denominations equal to thirteen. For example, an eight is perfectly removed with a five, a six with a seven, a queen with an ace, a jack with a deuce, and a king is removed alone.

If there are no options among the open cards, use the rest of the deck, which gives out three cards when clicked. It is also convenient to use an additional cell for temporary storage, but only one card can fit in it. The authors don't allocate much time, so hurry up! 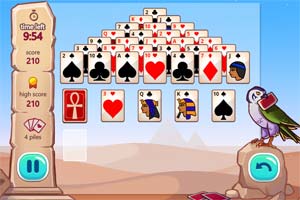 You can play the game PYRAMID JUNGLE SOLITAIRE GAME online 24 hours a day for free. It is no need to download and install it on your computer, and it is also not required you to be the registered user. Just ckick and enjoy. See also a set of related games below on that you might be interested to look.

WONDERS OF THE WORLD SOLITAIRE GAME