A variant of a common and beloved game (especially by the fair sex), which was played on prehistoric computers. Actually LINES or BALLS as this game is sometimes called. The rules are ridiculously simple. The playing field consists of cells in which there are balls. It is necessary to rearrange the balls of the same color in a line of 5 or more horizontally, vertically, or diagonally. At the beginning, there are not many balls, but during the game their number increases, namely, if you move the ball and none of the line of balls is finished (not removed), then several more balls will appear on the field.

Something useful, by the way, can be found in the article Games of the balls and lines series. We recommend you to read it. 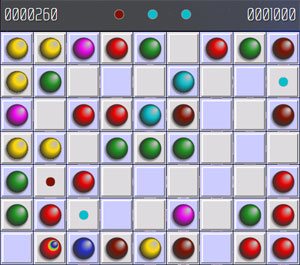 You can play the game LINES 2 online 24 hours a day for free. It is no need to download and install it on your computer, and it is also not required you to be the registered user. Just ckick and enjoy. See also a set of related games below on that you might be interested to look.