Japanese puzzle associated with the placement of the numbers in the table. You need to enter in the grid numbers so that none of them occur either in the same row nor in the same row. Meaning, a task reminiscent of the famous Sudoku, with some simplifications. There is only one square and smaller numbers. But this really is only the beginning. As you move up the levels, the number of cells in the table will also grow. For example, in the first stage the table only 16 cells, the second is 25.

As in Sudoku, some cells in the grid at the start already filled, and numbers in them cannot be changed. The more clues, the easier the task. Futoshiki there are more clues. Between some of the cells are the comparison signs indicating what the cell number is greater and which less. 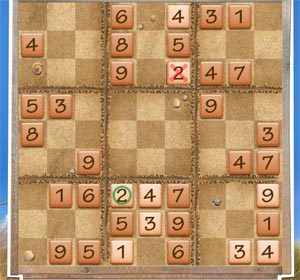 You can play the game FUTOSHIKI online 24 hours a day for free. It is no need to download and install it on your computer, and it is also not required you to be the registered user. Just ckick and enjoy. See also a set of related games below on that you might be interested to look.

PLUMBER FOR A SMARTPHONE

JEWEL OF THE NILE

BACK TO THE STARS
TOP games
Brain trainers