One of the biggest problems in agriculture is vampires and other monsters that come at night to steal livestock and other animals. So it was for centuries, but people are unable to even catch the Chupacabra. But once the attacks stopped, people thought that the monster was gone, but actually the boss of the monsters just bored to eat meat. Now it pulls to the vegetables. Unfortunately for him, he ventured to attack the farm of one mad scientist who turns your plants into dangerous mutants.

In this strategy, you will have to play for the scientist and defend your farm from the monsters attacking from all sides and destroying nature. Arrange a line of defense from various towers to stop all waves of enemies. The game has five difficulty levels, and their choice will determine the number of waves and get gold. 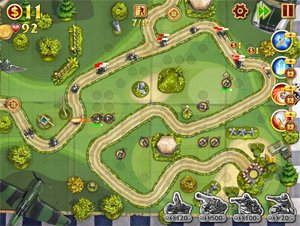 You can play the game CONSERVATIONIST online 24 hours a day for free. It is no need to download and install it on your computer, and it is also not required you to be the registered user. Just ckick and enjoy. See also a set of related games below on that you might be interested to look.