Can I stop an armed enemy with my finger? You can, if your finger is several times larger than this opponent.

One fine day, a small and ugly-looking creature decided to have a picnic in the sun. Everything was fine until the villainous finger crushed his cake. Although the creature was ugly, it didn't do any real evil deeds, unlike the finger. Now the finger has selected the greatest value in the life of the creature, and it will mercilessly take revenge with a variety of firearms.

In this game, you take the side of the villain, that is, the finger. Use up and down movements with the mouse button held down to kick your opponent and sideways movements to throw them off your finger. When an enemy jumps on your finger, it will deal permanent damage to you. By defeating enemies, earn money and buy various bonuses along with game jokes.

Revenge on the boss 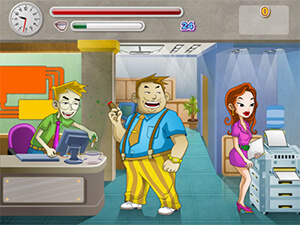 You can play the game CANNON AGAINST THE FINGER online 24 hours a day for free. It is no need to download and install it on your computer, and it is also not required you to be the registered user. Just ckick and enjoy. See also a set of related games below on that you might be interested to look.

REVENGE ON THE BOSS

PUT ON A SOCK

BEAVIS AND BUTTHEAD THE SPITTERS
TOP games
Jokes and cartoons