If you are a fan of the bubble shooter genre and decided to add a friend or girlfriend to this category of games, then you have come to the right address. In front of you just balls for two. The field is divided into two parts: left and right. All you have to do is shoot balls from the cannon at the masses of balls crawling from above.

Please note, unlike its genre counterparts, in this toy to remove a group from the mass, it must contain at least four balls of the same color! Pay attention to this. Another difference: the ball mass does not have a honeycomb structure and is not amorphous, as in many other cases, but is ordered — clear rows and columns are viewed.

After each single-color group is cleared, the player accumulates mana, a kind of magic reserve that is used automatically as it accumulates and is used to prevent the opponent from completing the task. Mana properties depend on the card that the player selected before starting. The presence of magic, in general, enlivens the game and adds interest and unpredictability.

Of course, the controls are a little unusual, after all, the keyboard is involved here, but in the first seconds of the game all questions in this direction are removed. By the way, you can also assign a combined control over the gun: one player works with the mouse, the other taps on the keys. Here are the main buttons used in the game. The player on the right uses the arrows: right-left - move the cannon, up-shoot, down-use magic (if mana has accumulated). The same functions are performed by the WASD or ZQSD buttons for the right player.

However, you can also choose a single player mode or a variant of the game with a computer, specifying the difficulty: easy, medium, difficult or impossible. The computer plays perfectly, you will be interested! But the two of us still have more emotions!

Balloons for your tablet 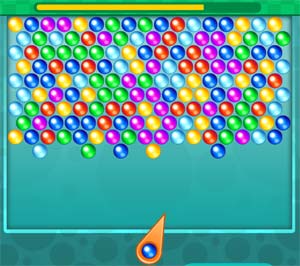 You can play the game BALLOONS FOR TWO online 24 hours a day for free. It is no need to download and install it on your computer, and it is also not required you to be the registered user. Just ckick and enjoy. See also a set of related games below on that you might be interested to look.

BUBBLES FOR YOUR TABLET