With the passage of time, the games of shooting balls are becoming more and more perfect, although it would seem that how else can they be improved. However, developers make changes to the physics, image, and so on. Let's see what's new in the fifth version of Bubble Shooter (bubble - bubble, shooter - shooter) with the space name Galaxy.

The first thing that catches your eye is the quality of drawing balls (bubbles). It's almost perfect. The uniformity of sliding the mass of bubbles is also on the top five. The animation is decent. But the visualization of aiming is unusual and at first somewhat upset. The fact is that when aiming a projectile ball, the mouse pointer is not visible, which can significantly reduce the accuracy of the hit. Yes, there is a shot direction arrow, but there is no pointer. It's unusual.

However, at subsequent levels, the reason for its absence is clarified. It turns out that this is not a bug or a programmer flaw. This is a specially invented feature just to complicate the game. If you pass several levels, you will see the appearance of special bubbles that include visualization of aiming, but only for a while. There is also a freezing of balls in the game, which especially helps when the mass is very close to the gun.

You can tell about your current progress by looking at the status of the progress bar (the column to the left of the field with balls). Its 100% completion successfully completes the current level. You can control the bubble projectile either with the mouse or with the keyboard arrows. Shoot - left mouse button or space bar.

Bubbles for your tablet 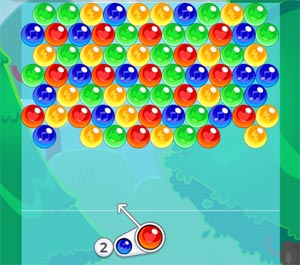 You can play the game BALLOONS: BUBBLE SHOOTER 5 online 24 hours a day for free. It is no need to download and install it on your computer, and it is also not required you to be the registered user. Just ckick and enjoy. See also a set of related games below on that you might be interested to look.

BALLOONS FOR YOUR TABLET