Unlike the traditional approach to Zuma decided to offer us the authors of this game. In the traditional Zumax the player controls a gun which is in the center of events, and shoots the snake out of the balls, crawling to his burrow. Replacing the gun fairy, the developers still and let her fly around the game space (of course under the control of the player). Moreover, if the classics of the genre didn't have to worry about reloading the cannon balls shells, then the mechanism is shifted to the shoulders of the player.

Fairy must collect the colored balls flying around, and put them in the desired location of the snake. The choice of such a right place is on the principle of three in a row, i.e. yellow, for example, the ball should be placed next to two or more same balls that are part of the snake. Being close to each other, three or more ball burst, reducing the length of the creeping ball reptiles. Actually, this is the main task — to reduce the length of the snake to zero, completely destroying it. 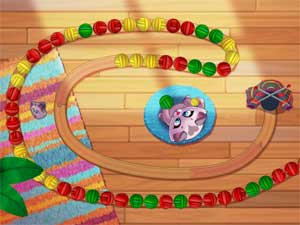 You can play the game ZOOM WITH THE FAIRY online 24 hours a day for free. It is no need to download and install it on your computer, and it is also not required you to be the registered user. Just ckick and enjoy. See also a set of related games below on that you might be interested to look.

ZUMA ON THE FARM
All games
Zuma

ZOOM WITH THE WIZARD

SAVE BIRDS OR ZUMA IN THE CELLS