A race of ancient, powerful beings, the Xenos,have protected the mortal world from various misfortunes and from themselves for thousands of years. Sometimes with a pen, sometimes with a blade, they corrected the balance in the world and kept it in harmony, rarely interfering directly in people's lives. With the new dawn, pestilence came to their world, changing the very essence of life, turning it into bloodthirsty demons and mutants. Now the Xenos are going to war, something that hasn't happened in a very long time.

This is a game in the rpg defense genre. You are a Xenos commander who commands a special squad of defenders who purge the world of evil. In battle mode, you control troops to prevent enemies from reaching the borders, between levels you manage the squad, purchase items for it and prepare for the next battle.

The initial training will teach you the basics of the game. 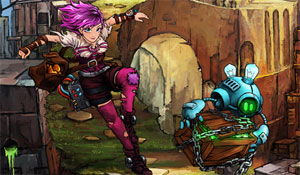 You can play the game XENOS online 24 hours a day for free. It is no need to download and install it on your computer, and it is also not required you to be the registered user. Just ckick and enjoy. See also a set of related games below on that you might be interested to look.