A fun competitive arcade game for one or two players. In one reality, which was very fantastic and alternative, weapons and fortifications developed to such a level that neither of the warring parties could defeat the other in an armed confrontation. It seemed that the world had ended the war, but the conflicts were not exhausted. Now all military disputes are resolved by playing volleybombs - sports similar to volleyball. The winner gets everything.

To control in single player mode, use the arrows, when the second player joins, use the WAD keys additionally.

At the beginning of the round, a bomb falls, your task is to beat it off with a helmet to the enemy's territory, if the bomb falls on your front line, the enemy gets one point.

Rabbit with a cable 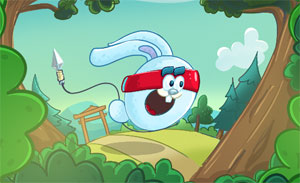 You can play the game VOLLEYBALL WITH A BOMB online 24 hours a day for free. It is no need to download and install it on your computer, and it is also not required you to be the registered user. Just ckick and enjoy. See also a set of related games below on that you might be interested to look.