Diagonal or cell principle of making lines of three or more elements is used in this game, shrouded in the romance of the sea. Paraphernalia of voyages, and adventures connected with in search of treasure, pirates and ship theme just gleams in the eyes when they open the playing field of the first level.

The game, however, complex. And not because objects are many, and not because it's so colorful and gaudy that the eyes diverge. The fact that the goal of each level features different. And she is not an ordinary permutation of the elements and composed their chains of three. Here the problem is formulated in-depth.

Have a Look at the field, at the first stage, there are the cell with the substrate. Cleaning of all these substrates is the main problem, deciding which you will be able to next level. To remove them, you need to make a line of identical elements found in these cells. The disappearance of this line will be removed and the substrate in the appropriate cells.

Further stages of sea adventures even more complicated. The substrate to be reusable, on the field appear to be insurmountable obstacles and so on. The reusability of the substrate requires the player to harvest such cells not one, but two or three lines. And obstacles are overcome in the destruction of lines of three or more items next to them.

One More trouble that adds thrills and momentum this time. It is slowly but surely running out. The tube with sea water on the left you can see what kind of lead time you have at the moment.

Incredibly interesting, beautiful, high-quality game. Highly recommend this game to fans of the genre three in a row are not often found in the vast playing space.

Treasures of the sea 2 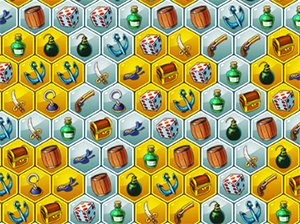 You can play the game TREASURES OF THE SEA online 24 hours a day for free. It is no need to download and install it on your computer, and it is also not required you to be the registered user. Just ckick and enjoy. See also a set of related games below on that you might be interested to look.

THE TREASURES OF MONTEZUMA

CAVES OF THE MAYA

TREASURE ISLAND: THREE IN A ROW

THREE IN A ROW: HUNGRY WORMS 2

THREE IN A ROW: THE TREASURE OF SHAMAN

THREE IN A ROW HD: WORLD OF FISH
All games
Three in a row