A novelty from the series of games about the adventures of three funny and courageous pandas. After leaving their home zoo, the pandas took part in many adventures when they searched for their stolen camera, they managed to visit almost most of Japan. After they decided to go to the amusement park for the last time, they noticed a new entertainment, a fantasy tent that promises an unforgettable time in a fairy tale.

Curious pandas got exactly what was written, they were sucked into another world, where the laws of physics do not apply, but real magic works, and fairy-tale creatures live next to people. What mysteries will the new world bring to them?Use the mouse to move around and interact with objects. You control three heroes at the same time, but you can choose one of them and control it separately.

Three Pandas for your tablet 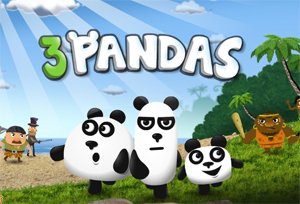 You can play the game THREE PANDAS IN A FAIRY TALE online 24 hours a day for free. It is no need to download and install it on your computer, and it is also not required you to be the registered user. Just ckick and enjoy. See also a set of related games below on that you might be interested to look.