Homer claimed to be the coolest racer in all of Springfield. Of course, no one believed him, Marge said that even a housewife could beat him, and Bart said that he would have done it even on his bike (although he still took a motorcycle). The dispute was proposed to be resolved in a race on ten different tracks in Springfield.

The game is made in the genre of racing arcade. Use the arrows to accelerate and maintain balance. Motorcycles are different from each other, Homer drives a big Harley, because of the voracity and weight of Homer, the motorcycle goes slowly, but he overcomes the slides best of all. Marge rides a scooter that accelerates faster than anyone else, but does not overcome obstacles well, finally, Bart's motorcycle is balanced. Collecting donuts fills the nitro bar, which can be used to speed up with the Z key. 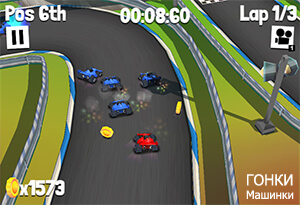 You can play the game THE SIMPSONS: FAMILY RACING online 24 hours a day for free. It is no need to download and install it on your computer, and it is also not required you to be the registered user. Just ckick and enjoy. See also a set of related games below on that you might be interested to look.