In June 1944, the Western Allies opened a second front. Operation Overlord caused significant damage to the armies of the Third Reich and greatly advanced the victory over Nazism in Europe. The most famous battle of that operation was the landing on Omaha Beach, which you might have seen in Spielberg's film Saving Private Ryan. The amphibious assault force encountered well-fortified coastal bunkers and lost many good soldiers. This game is dedicated to their feat of breaking through this steel defense. The game is controlled by arrows for movement and the spacebar for shooting. Every shot in this game is realistically deadly. You can protect yourself from enemy troops ' fire by hiding behind an enemy corpse. Collect tokens to earn points and break through to the end. Then you will know the price of that victory. 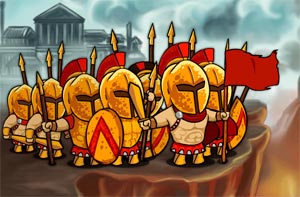 You can play the game THE ART OF WAR: OMAHA online 24 hours a day for free. It is no need to download and install it on your computer, and it is also not required you to be the registered user. Just ckick and enjoy. See also a set of related games below on that you might be interested to look.