This flash game was released in 1999! Old, but quite playable. The plot is similar to many games about tanchiki. Two tanks took up positions on the ground opposite each other. The player's task is to choose the right angle of inclination of the gun and the power of the shot, so that the projectile fired from the tank's gun hits the enemy tank.

You need to play together, if you are, of course, not a chess player, a fan of playing with yourself. Control of tanks is transferred alternately to each player and is carried out by the keys: up arrow-increase the power of the shot, down-decrease, right and left arrows-change the tilt of the gun. The currently set shooting parameters of the player whose turn it is are displayed in the upper panel. It also shows the current wind strength and direction — a red arrow. The wind significantly affects the flight of the projectile, so you should not neglect it. Try to destroy the enemy's tank in less shots.

And the game, meanwhile, is a rare one, already manufactured in 1999... 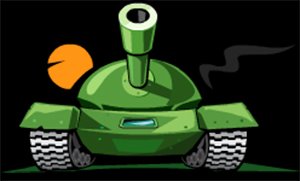 You can play the game TANKS FOR TWO online 24 hours a day for free. It is no need to download and install it on your computer, and it is also not required you to be the registered user. Just ckick and enjoy. See also a set of related games below on that you might be interested to look.