Series of puzzle games snail Bob over and over again remains consistently popular. Why? First, Bob is handsome, and secondly, the authors come up with a love of creating each level. If the gameplay remains unchanged, then the change of locations and new adventures are forced to return again and again. This time Bob been ice fishing with grandpa and wanted to catch something weighty and fantastic. This could be enjoyed forever, if evil toad sabotage, sending Bob to distant lands. Floe Bob landed on the mysterious island. Again adventure, but Bob and don't mind, they'll like You.

He has no super powers, cool tools, and even the brain, but Bob is still the best, because he has You, and it means a lot more than the lasers from his eyes and his big muscles. 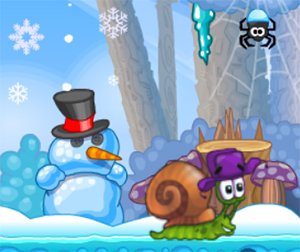 You can play the game SNAIL BOB 8: ISLAND online 24 hours a day for free. It is no need to download and install it on your computer, and it is also not required you to be the registered user. Just ckick and enjoy. See also a set of related games below on that you might be interested to look.