One day the dead rose up. This time, no stories about a dangerous epidemic or a deadly virus leaking from laboratories, Zombies rose from their graves and began to attack people. In the end, you'll still have to kill them, so what's the difference?

In this game, you need to survive for several waves, which means killing all the zombies that came to your soul. Use the arrows to move around and the space bar to shoot. Bonus weapons (submachine gun and rocket launcher), as well as coins, are dropped from dead corpses. The earned coins can be spent on improving the character's characteristics or strengthening the standard pistol or bonus barrels. After killing a certain number of zombies, you can call on the help of the grim reaper (death itself), which will destroy all the enemies on the map, probably the main character is not so simple.

The zombies are back 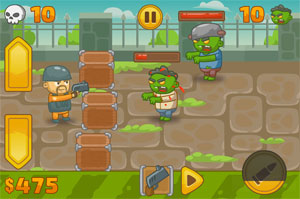 You can play the game SHOOT THE ZOMBIES online 24 hours a day for free. It is no need to download and install it on your computer, and it is also not required you to be the registered user. Just ckick and enjoy. See also a set of related games below on that you might be interested to look.