Among all billiards, Russian is considered the most strict. Thanks to the narrow pockets designed strictly for the size of the ball and having a minimum tolerance, you can only roll up the balls with extreme accuracy by hitting them. Unlike American billiards, so-called Pool, as well as Snooker, the balls on Russian billiards are larger and, accordingly, heavier. On the Russian tables there are different types of games: American, Siberian, pyramid and others, each of which is interesting in its own way. Here we will not delve into the subtleties and rules of each of the varieties, but focus on hitting the ball, which in this online game consists of three stages.

First step: choose a cue ball. Just click on the ball that you will play, i.e. on which you will hit the cue.
Second stage: aiming. For an accurate shot, the game has a guidance system that shows the possible trajectory of the ball after the impact. This information is convenient to use when playing a foreign ball, the one that they want to roll and hit with a jam. If you want to play brother-in-law, i.e. put a ball in the pocket that is hit by a cue, then you should not use the hint of this system, because it is designed only for other people's balls.
The third stage: the actual blow itself, which is performed with a preliminary selection of strength on a dynamic scale (on the right).

Despite its compact size (the game weighs only 50 kb), the physics here is implemented quite well: the angles of impacts and reflections, dynamics-everything is quite realistic. The only thing that is not felt during the game is the massiveness of the balls, their noble inertia or something... In general, we recommend this version of Russian billiards! 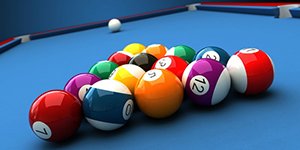 You can play the game RUSSIAN BILLIARDS online 24 hours a day for free. It is no need to download and install it on your computer, and it is also not required you to be the registered user. Just ckick and enjoy. See also a set of related games below on that you might be interested to look.

SNOOKER FOR TWO
All games
Billiards

AT THE POOL TABLE

AT THE POOL TABLE