Everyone at school played soccer.Sea Battle! The paper version of this game is very popular, because it requires only a piece of paper in a box and a pen or pencil. Draw two 10-by-10 squares next to each other, apply markings: horizontal letters from A to K, vertical numbers from 1 to 10 on each square, and on the left square draw your ships: 1 of four cells, 2 of three, 3 of two, and 4 single-celled ships.

On the right square we will mark our shots at enemy ships, at the beginning of the game it is empty. In this flash game, we first use the mouse and the spacebar to place ships on our field, and then use the same mouse to shoot at enemy ships in whole bursts. The number of shots in the queue directly depends on our combat power. The smaller the ships, the fewer shots in the queue. The enemy is quite strong even at the simplest level. Victory will bring us honor, glory and one point! Whistle all hands up!

Watch this video and learn the specifics of this online game. 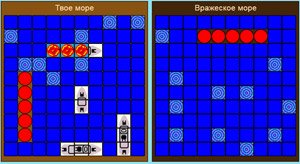 You can play the game NAVAL BATTLE online 24 hours a day for free. It is no need to download and install it on your computer, and it is also not required you to be the registered user. Just ckick and enjoy. See also a set of related games below on that you might be interested to look.

NAVAL BATTLE WITH A COMPUTER
All games
Logical games