The Fourth World War was not the last in the history of mankind. It wasn't batons and rocks that were used, but unmanned combat systems. The lack of human losses led to the fact that the wars were very protracted, without the advantage of one of the parties. The Western Alliance Command has developed a project for a unique combat system that will turn the tide of the war. Project “Military Tower has created autonomous fortresses that can be dropped to the rear of enemy territory. Now the enemy will be defeated.You are the operator of one of these fortresses. Use the mouse to control the turret and aim. The attack is performed automatically. For destroying enemies, the command awards you funds, use them to improve your tower. Go ahead, commander, a turning point in this war depends on you. 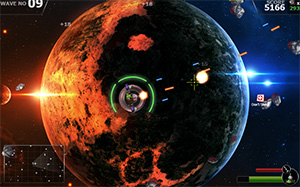 You can play the game MILITARY TOWER online 24 hours a day for free. It is no need to download and install it on your computer, and it is also not required you to be the registered user. Just ckick and enjoy. See also a set of related games below on that you might be interested to look.