The Mesozoic era is known for the dominance of dinosaurs on the planet. The word dinosaur is translated from Greek as scary, terrible or dangerous. As you know, there were a lot of dinosaurs at that time, and not all of them were so scary and terrible. But let's not dig into paleontology, but play an online game Mahjong, designed in the style of the Mesozoic era. The background of the game field shows scenes from those distant times when the dominance of lizards was almost universal.

The flash game itself contains several levels with increasing difficulty. The main task of the player is to make all the mahjong tiles disappear from the game table, become extinct, like dinosaurs in their time. You need to remove tiles (or dice) in pairs, according to the images applied on them, for example: spider with spider, beetle with beetle, raptor with raptor, and so on. You cannot remove bones if at least one of them is covered by others, i.e. if there are other bones next to it on the right and left, or at the top and bottom. Even a child can cope with the first levels, but then you need to pay more and more attention to the game table. 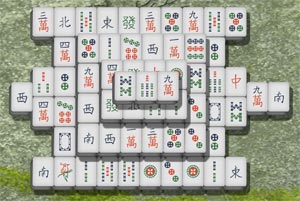 You can play the game MAHJONG MESOZOIC online 24 hours a day for free. It is no need to download and install it on your computer, and it is also not required you to be the registered user. Just ckick and enjoy. See also a set of related games below on that you might be interested to look.