In 1945, the Third Reich went to any adventures to delay its own defeat. One of these secret projects was the Wunderwaffe, called zeitmaschine. The secret laboratory, which remained the last stronghold of the German Empire, was destroyed by Allied bombers, but the zeitmaschine worked. Under the influence of the explosion of an aerial bomb, the castle was thrown back to the distant 13th century. Medieval German feudal lords took the appearance of the castle as a manifestation of diabolical forces and went to destroy it.

You play as a surviving Wehrmacht soldier, a knight of the Iron Cross. The fact that the time machine worked is good, but in the 13th century there was no Second World War. You need to find all the elements of the Wunderwaffe and put them together. Along the way, fighting off wild Aryan ancestors with the help of a good Schmeiser. Sorry, great-grandfathers, but the Empire comes first. 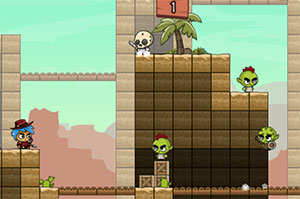 You can play the game KNIGHT OF THE IRON CROSS online 24 hours a day for free. It is no need to download and install it on your computer, and it is also not required you to be the registered user. Just ckick and enjoy. See also a set of related games below on that you might be interested to look.

RABBIT WITH A CABLE