The team of adventurers been in episodes with the Mayan caves and they hunted for treasure in the mazes of the Incas. The Incas and Aztecs — peoples ancient and, according to legend, possessed of immense treasure. This fact attracted our friends in the ancient buildings of the Aztecs, where you along with them will embark on an exciting and, I must say, adventurous adventure.

To Play comfortably together. Select the character you will control: one controlled by the arrow keys, the other keys WASD. As before, in games for two this class is valued, the solidarity of the characters. They are in constant contact with each other, helping to overcome obstacles and solve problems level. Special keys and their functions you will see in the process of passing the first level. Remember them — will help in the future. Good luck in conquering the mazes of the Aztecs!

Fireboy and watergirl in the forest temple 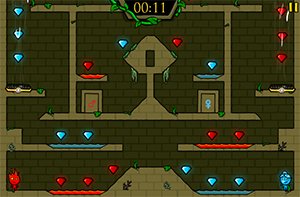 You can play the game IN THE MAZE OF THE AZTECS online 24 hours a day for free. It is no need to download and install it on your computer, and it is also not required you to be the registered user. Just ckick and enjoy. See also a set of related games below on that you might be interested to look.

FIRE AND WATER: THE FOREST TEMPLE 3

LABYRINTHS OF THE PYRAMID

LABYRINTHS OF THE INCA FOR TWO

THE IRONY OF ZOMBIES
All games
Rpgs and arcades

RED BALL AGAINST A GREEN

IN THE CAVES OF MINECRAFT 2
New games
Rpgs and arcades

FIREBOY AND WATERGIRL IN THE FOREST TEMPLE

TEMPLE RUN FOR TABLET AND PC