To produce food in the age of cavemen was Oh how difficult. In the Arsenal of prehistoric hunters with almost no weapons. All had hunters past, could be counted on the fingers: spear (stone tied to a stick), cudgel, and later another, and bow and arrows. In addition to this, caveman had known how to build primitive traps for game, but no more. So, on the hunt went whole units, and the prey of a large animal, such as mammoth, was a real treat.

But not enough to kill the beast, to have and to prepare: fry, for example. All this took a lot of time and effort. Imagine what could be the outrage of people who have all prepared so hard just took and took?! But in this online game two cunning and clever dinosaur doing exactly that: produce cooked people food and her own eating for both cheeks!

Why two of them? The fact is that skills matter, and agility isn't enough to solve the problem, and there where not cope the first, connected second. So the game is easier to play together. One player controls the first dinosaur, the other the second. Try to pass the level without leaving its territory not a single edible piece. People, of course will disturb the dinosaurs. 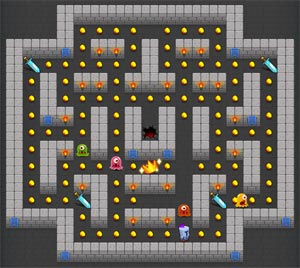 You can play the game HUNTING DINOSAURS online 24 hours a day for free. It is no need to download and install it on your computer, and it is also not required you to be the registered user. Just ckick and enjoy. See also a set of related games below on that you might be interested to look.

CHESS WITH THE COMPUTER 2