Although not in a row, but from three in a group. Just such a large number of single-colored blocks touching each other is enough to remove them from the container. Blocks (balls or cubes), glued together in five pieces of different colors, fall into this container from above, filling it. Your task is to prevent the tank from overflowing by removing blocks. Three or more identical ones - your goal, click on these groups, unloading the tank. The difference between the game and its genre counterparts is the dump, which takes on the appearance of a mass of blocks, in contrast to the elements ordered in the table in other games.

Three in a row for the tablet 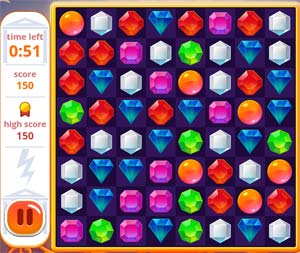 You can play the game DUMP OF BLOCKS online 24 hours a day for free. It is no need to download and install it on your computer, and it is also not required you to be the registered user. Just ckick and enjoy. See also a set of related games below on that you might be interested to look.

CONNECT ZOMBIES ON YOUR TABLET

PUT YOUR FACES TOGETHER

GROUPS OF THREE PER SPEED

PLUSH THREE IN A ROW

THREE IN A ROW: JITTLE

TRICKY BLOCKS FOR YOUR TABLET

MYSTERIOUS RUNES
All games
Three in a row

BLOCKS IN THE JUNGLE

TERRARIUM: THREE IN A ROW
New games
Three in a row