The end of the World has happened on Earth. Aliens from distant worlds turned out to be hostile and did not make contact. But they successfully burned the Earth's atmosphere and turned almost all people into zombies. The survivors have to huddle in shelters, making short forays outside. But not all survivors and non-zombies behave like this.

There is such a brave guy Ted, who does not care about anything. He is so mad that he takes a gun and goes to smash all the zombies and aliens. Yes, but whether his plan works depends only on you and your ability to shoot and move quickly, virtually, in the game, of course.

If you do not succeed and the zombie aliens finished off your hero, the game ends with the words Ted is dead (Ted is dead), in translation — Ted died. 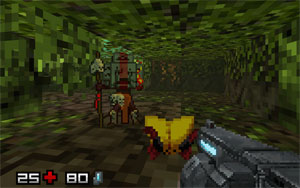 You can play the game DISTRAUGHT TED online 24 hours a day for free. It is no need to download and install it on your computer, and it is also not required you to be the registered user. Just ckick and enjoy. See also a set of related games below on that you might be interested to look.