The mercenary soldier took a dangerous contract, he had to deliver a prehistoric artifact to the customer, but when he captured it, the mercenary was transported to the Cretaceous period. Now he needs to survive in this wild world and find a way to get back.

The dinosaur is much stronger than a human, but an experienced mercenary is also not made with a finger, he is armed with a Kalashnikov light machine gun and has enough ammunition to survive the lizards.

This is a survival shooting game. Each level is a battle against hordes of predatory dinosaurs that try to devour the main character. You need to kill a certain number of individuals to replenish health and ammunition. Use the arrows to move, the ctrl key to shoot, and the space bar to reload.

At least now we know what caused the dinosaurs to become extinct.

Find a way out 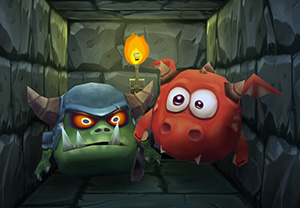 You can play the game DINOSAUR HUNTER online 24 hours a day for free. It is no need to download and install it on your computer, and it is also not required you to be the registered user. Just ckick and enjoy. See also a set of related games below on that you might be interested to look.

TEMPLE RUN FOR TABLET AND PC