Go through the famous, more than a thousand-year development path of siege warfare. It starts with the first documented siege in ancient China and ends with the siege of Turin, the culminating battle of the War of the Spanish Succession.

To fire a siege weapon, just click on the appropriate block. Use your knowledge of physics to deliver critical strikes on the fortress structures. Your goal is to destroy all the soldiers in each of the castles, destroying other items will bring you extra points.

Especially do not get carried away with destruction, because you do not have to hurt innocent peasants, otherwise the level will have to start again.

A true siege master can manage two or three shots, and more often even one. The real skill lies not in the collapse of castles, but in finding their vulnerable points.

We also advise you to look into the players ' empire, perhaps there will be such castles that will not be up to the teeth of any of the masters. 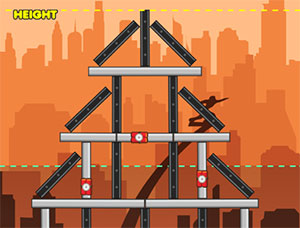 You can play the game DESTROY THE CASTLE (SIEGE MASTER) online 24 hours a day for free. It is no need to download and install it on your computer, and it is also not required you to be the registered user. Just ckick and enjoy. See also a set of related games below on that you might be interested to look.

CANNON AGAINST THE CASTLE

DESTRUCTION OF THE CASTLE