And even better, four or five! And the most successful option is to build a chain of five candies, which will also include a bonus one. By cleaning such a line, you can immediately complete most of the level plan. Although such chances rarely fall out.

However, you can also create bonus candies yourself. If you clear a line of more than three identical candies, for example, four or five, an unusual super-candy will appear in place of the disappeared row. You will recognize it easily, it stands out noticeably from the general background. So, try to include it in one of the following removable chains.

The general rules fully comply with the standards of three in a row games: making horizontal and vertical rows of at least three elements of the same type and color leads to their disappearance from the field. The player is awarded points. The length of the row and the number of lines eliminated one after another increase their weight in points, and very noticeably.

Each level here has its own goal, expressed in the same points, as well as a time limit. You can see your progress in the online mode on the left: red stripes on a white candy stick. The remaining time spent on solving the problem is shown in the upper label on the left.

Finally, I would like to praise the authors. The game turned out to be bright and beautiful. The candies are clearly drawn and realistic (you just want to steal a couple from the playing field). It is interesting to play, but with the growth of the level number, it is also quite difficult, which only whets the appetite. 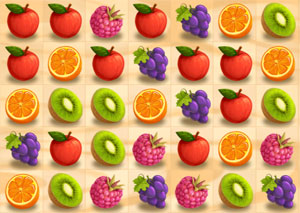 You can play the game COLLECT CANDIES IN THREES online 24 hours a day for free. It is no need to download and install it on your computer, and it is also not required you to be the registered user. Just ckick and enjoy. See also a set of related games below on that you might be interested to look.

THREE IN A ROW FOR ANDROID: CANDIES

THREE IN A ROW: SWEET ASTRONOMY

IN THE LAND OF CANDY 4

THREE JELLIES IN A ROW

IT'S TIME FOR CANDY

BLOCKS IN THE JUNGLE

TERRARIUM: THREE IN A ROW
New games
Three in a row