Mass riots broke out in the city of N. Although it is difficult to call what is happening here riots. Rather, it is a well-prepared armed clash. Yes, but between who and who, who are the participants? And they participate: the police and some special forces soldiers, let's call them rebels. By the way, the rebels were clearly better prepared for the clash than the police.

Of the police services, only Inspector Vijay was present during the rebel invasion. He had to take a deep breath for everyone. Well, the fences were still at hand - covered up. By the way, you're playing on VJ's side here. Try not to let the rebels get close and dodge the shots. The accuracy of your shooting (more precisely, Inspector VJ) will determine the duration of the battle and, as a result, the game as a whole.

The first level will show you how not rapid-fire weapons inspector. You will understand that something needs to be done about this and take measures in the form of upgrading weapons and ammunition in the break between levels. In any case, we advise you to do this, otherwise, you simply will not be able to defend the street further. 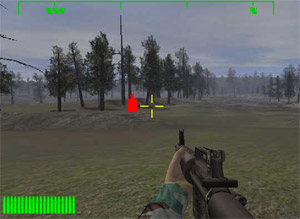 You can play the game CLASHES IN THE CITY: INSPECTOR VIJAY online 24 hours a day for free. It is no need to download and install it on your computer, and it is also not required you to be the registered user. Just ckick and enjoy. See also a set of related games below on that you might be interested to look.