The famous heroes of Marvel and DC comics gathered once, Spider-Man and Hulk on the one hand, Batman and Superman on the other. As is customary, they decided to face off with their strength, at first they fought, but since they were all very cool, no one won. Then they arranged a competition for overeating, in the end they ate everything that was there and no one lost. Finally, they found the best way to compete. Whoever runs the furthest will be considered the coolest of the super heroes. Everything is fair and depends only on you.

You can play either alone or with friends. Who of you will accumulate more points based on the results of the race, that is the winner. If you play together, the first player jumps on the space bar, and the second on the left mouse button. In a single-player game, both options are suitable. Collect coins, dodge missiles and prove that you have no equal among super heroes. 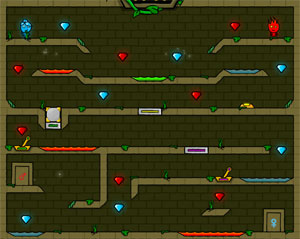 You can play the game CHUBBY SUPERHEROES online 24 hours a day for free. It is no need to download and install it on your computer, and it is also not required you to be the registered user. Just ckick and enjoy. See also a set of related games below on that you might be interested to look.

FIRE AND WATER ON THE ISLAND

WATER AND FIRE: TEMPLE OF THE FOREST 3