Earth was the best planet in the universe. It should be noted that we are not talking about your Land, intelligent two-legged monkeys. This was the Land of intelligent cats who lived in harmony with nature, did not fight for the time being, and were extremely developed. This continued until a meteorite hit the Ground, after which the inhabitants of the planet began to turn into the living dead, who were not stopped by helicopter blades, or even a shot in the head.

Our hero has lost all his family, friends, and his beloved eye, but he still has hope. He also has you, will you help him liberate the Earth?

Aim the bazooka with the mouse and press the left button to shoot. It's simple, if the rocket hits, then the zombie is finished. On Earth, metals have special properties, so they reflect missiles that hit them, but flying pieces of Earth do not reflect. The game is filled with logical tasks and typically feline humor, but only those who have learned English well can understand it. 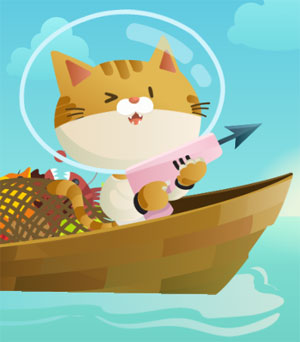 You can play the game CAT WITH A BAZOOKA online 24 hours a day for free. It is no need to download and install it on your computer, and it is also not required you to be the registered user. Just ckick and enjoy. See also a set of related games below on that you might be interested to look.