A mix of racing parking and arcade physics game. Old Le Bron was known as the Lancelot of the Bronx, and in the old days it was so hot that Michael Jordan would smoke nervously on the sidelines. A real champion, an aristocrat of the world of sports, but then he specifically got drunk and began to suffer from all sorts of eccentricities, such as snowballs usually have. Midlife crisis or something like that. After losing several games, the Boss decided to fire Bronx, but seeing him on the court gave him one last chance. If he can throw basketballs into all the Bronx baskets, he's back in the game.

In Boss mode, you need to collect basketballs and park near the playground. Driving time is limited, so hurry up. Use the arrows to control it.

In the old man Le Bron binge mode, you need to throw the ball into the basket. If the Boss was smart enough to collect more soccer balls, you can easily calculate the optimal strength and angle of the throw. Aim with the mouse and click to throw the ball.

Parking for your tablet 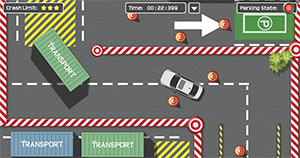 You can play the game BASKETBALL PARKING LOT online 24 hours a day for free. It is no need to download and install it on your computer, and it is also not required you to be the registered user. Just ckick and enjoy. See also a set of related games below on that you might be interested to look.

TRUCK IN THE PARKING LOT