Start for life-flash version of arkanoid was the popularity of the game Breakout, has already launched in 1986, the year known igrostroitelnyh the company Atari (remember, even computers are produced with such a brand). Probably, this flash implementation is not far removed from those first versions of breakout.

Here's a handy racket leaning in the direction of motion, which in many cases prevents loss of the ball. Blocks-bricks ordinary, among them there are surprises catching which you will be able to obtain either benefit, in the form of, for example, lengthening of the racket, or harm (racquet may be shortened). The way to earn points, you need not just beat the block, you must also catch the number itself, falling down after the destruction of the brick. 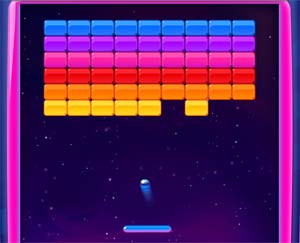 You can play the game ARKANOID OLD online 24 hours a day for free. It is no need to download and install it on your computer, and it is also not required you to be the registered user. Just ckick and enjoy. See also a set of related games below on that you might be interested to look.