Racing arcade game made in the style of the unforgettable need for speed series. Take part in hardcore races outside the city and become the champion of underground racing. Provincial agricultural areas, snow-covered forests, and sweltering canyons became the arenas for racing.

Use the WASD or arrow keys to move around. Obstacles will be not only rival racers, but also traffic from civil cars and sharp turns with skids. Your car is not a tank and can be broken to a state in which it will not be possible to drive. You get prize money every time you reach the end and take from first to third place. The money earned can be spent on buying new racing cars, because racing skills are only half the battle, and it's best to implement them on a brand-new car.

Race for the tablet 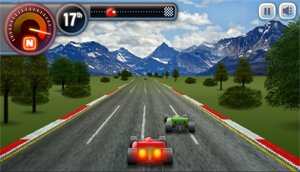 You can play the game 3D RACING OUTSIDE THE CITY online 24 hours a day for free. It is no need to download and install it on your computer, and it is also not required you to be the registered user. Just ckick and enjoy. See also a set of related games below on that you might be interested to look.