One day, scientists found a cool and almost limitless source of fuel, but by a strange coincidence, the zombie apocalypse began at the same time. Underground gems quickly became the most efficient fuel. The energy companies began to develop these stones extensively, and unfortunately, the zombies killed off civilization much earlier than the companies were able to make huge profits.

You play as one of the survivors, he travels through deserted wastelands and refuels from gem gas stations. Just at this time, the zombies are particularly ferocious and begin to attack people. Oh, coincidences, some paranoid person might say that it was the gems that caused the infestation and the lifeblood of the undead.

This is a logical puzzle game, you need to connect stones of the same color with the mouse. Hold down the left mouse button and draw a line between three or more zombie flowers. 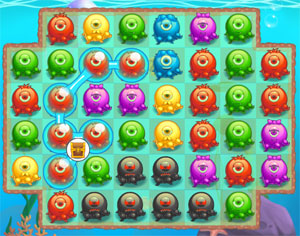 You can play the game 3 IN A ROW OF ZOMBIE FLOWERS online 24 hours a day for free. It is no need to download and install it on your computer, and it is also not required you to be the registered user. Just ckick and enjoy. See also a set of related games below on that you might be interested to look.

CONNECT ZOMBIES ON YOUR TABLET

PUT YOUR FACES TOGETHER

ROSS IN THE DARK

THREE MEN IN A CAVE