The Sultan was known for his temper, he had many wives, but they all ended very badly once bothered him. Beautiful Scheherazade has been kidnapped by the Sultan and was forced to become a concubine. Knowing about the strangeness of the Sultan, she decided not to surrender, but to confuse him, telling him stories, which would not occur for a thousand and one nights.

Game in the genre of three row. The basic principle is simple: using the mouse, change the permutation of the colored stones so that in one step formed a line with three or more stones of the same color. For the successful passage of level, it is necessary that all the pieces of the quest item appeared at the bottom of the playing space. In return you will receive a part of one of the tales which Scheherazade told to the Sultan. 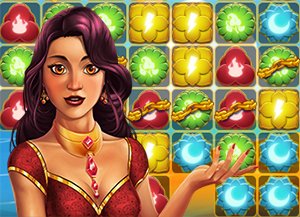 You can play the game 1001 ARABIAN NIGHT online 24 hours a day for free. It is no need to download and install it on your computer, and it is also not required you to be the registered user. Just ckick and enjoy. See also a set of related games below on that you might be interested to look.

THREE IN A ROW: THE SNOW QUEEN 4